I don't know what to think of this. I wonder what the impact will be on our PA Wilds Environment?  Currently Cameron County has resisted public use ATV trails claiming they disrupt the peaceful  environment  we have, but the construction of these solar farms are sure to have some impact. 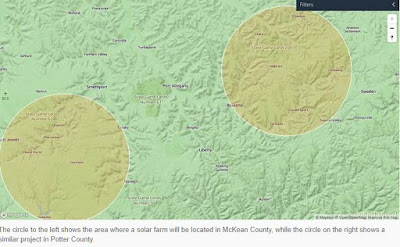 photo property of the Bradford Era
More than 600 acres in a wooded area of Sergeant Township will be the future home of an Amazon solar farm.
The giant Seattle-based e-commerce company plans a similar, but smaller, project in Potter County, according to a press release issued Wednesday. A map available on the company’s website appears to indicate the solar farm would be in the area of Hebron Township.
In McKean County, planning director Jeremy Morey explained, “This solar farm will be along the Clermont-Wilcox Road in Sergeant Township. The size will be 618 acres of solar panels and construction was to begin later this year, I believe.”
All of the solar panels will not be located in a giant clump on the property, but spread out in smaller parcels.
Morey said the farm will be located “around 11 miles as the crow flies from the airport,” but it is not expected to cause issues for airplanes with glare or reflection. “We were told by the company that typically solar panels do not produce glare, since they want to capture that solar energy and not deflect it.”
These two solar farms are part of a total of 14 renewable energy projects Amazon is undertaking in the U.S., Canada, Finland and Spain “to advance its ambitious goal to power 100% of company activities with renewable energy by 2025 — five years ahead of the original target of 2030,” a press release from the company read.
A spokesperson for Amazon told The Era Thursday how much energy is expected to be produced at the local farms.
“The Potter County project is 30 (megawatts), which when enabled will produce 57,205 (megawatt hour) of energy, and it’s scheduled to come online in 2023,” said Lauren Lynch, head of global sustainability and infrastructure PR for Amazon Web Services. “The McKean County project is 90 MW, which when enabled will produce 175,575 MWh of energy, and it’s scheduled to open in 2023 also.”
One MWh is about the equivalent to the amount of electricity used by 330 homes in one hour.
“The new projects bring Amazon’s total renewable energy investments to date to 10 gigawatts (GW) of electricity production capacity — enough to power 2.5 million U.S. homes,” the press release stated. “Amazon is now the largest corporate buyer of renewable energy in the U.S. and the world.”
The release explained why Amazon was undertaking the projects.
“The latest utility-scale solar and wind projects will supply renewable energy for Amazon’s corporate offices, fulfillment centers, and Amazon Web Services (AWS) data centers that support millions of customers globally,” the release read. “These projects will also help Amazon meet its commitment to produce enough renewable energy to cover the electricity used by all Echo devices in use. These new projects support hundreds of jobs while providing hundreds of millions of dollars of investment in local communities.”
Amazon founder and CEO Jeff Bezos was quoted, too, speaking about the importance of renewable energy.
“We’re driving hard to fulfill The Climate Pledge—our commitment to reach net-zero carbon by 2040, 10 years ahead of the Paris Agreement. Our investments in wind and solar energy in the U.S. and around the world send a signal that investing in green technologies is the right thing to do for the planet and citizens — as well as for the long-term success of businesses of all sizes across all industries everywhere,” Bezos said.
Amazon will now have a total of 232 renewable energy projects globally, including 85 utility-scale wind and solar projects and 147 solar rooftops on facilities and stores worldwide.
As for Sergeant Township, the 2000 Census reported 176 residents with a population density of 2.2 people per square mile.
Nearby Olean, N.Y., has several solar farms, including a 17-acre former brownfield site between Interstate 86 and Homer Street called Homeridae. Olean Mayor Bill Aiello said in 2019 that the 11,800 solar panels generated enough electricity to supply 652 typical New York homes with power for a year.
Article  property of and  shared from the Bradford Era
https://www.bradfordera.com
Posted by Cameron County at June 28, 2021