Harrisburg – "Honorably discharged veterans of the United States Armed Forces have a new way to proudly display their service as PennDOT today announced the availability of a new series of military license plates honoring veterans of the Army, Navy, Air Force, Marine Corps and Coast Guard."On any given day, members of our armed forces are serving around the globe protecting our freedom," said PennDOT Secretary Allen D. Biehler, P.E. "PennDOT is pleased to announce this new series of military plates recognizing their sacrifices in service to our nation.

To obtain one of these plates, honorably discharged veterans must complete and mail Form MV-150, Application for U.S. Military Veteran Registration Plate, to PennDOT and include a certified copy of their DD-214, along with a $20 fee. Form MV-150 is available on PennDOT’s Driver and Vehicle Services Web site, www.dmv.state.pa.us, via the Military License Plates link under the Military Personnel/Veterans Information Center. Additional information and images of the new license plates are also available on this Web page. "
Posted by Cameron County at November 21, 2009 No comments:

Honor a Family Member with a Banner

The Sylvan Heritage Council is leading the way in Cameron County’s Sesquicentennial celebration. Banners will hang from the street lights depicting a picture and sponsorship name of people that have supported Cameron County over the past 150 years. The unveiling of the banners will kick off the 2010 celebration in March.

The cost to purchase a banner and select the picture is $185.00. The banner will become the sponsor’s property in November 2010. The Sylvan Heritage Council will have banner information at the Christmas in the Wilds event on Saturday, December 12.

Several families and organizations have selected banners. The Cameron County Historical Society has selected Victoria Claflin Woodhull. Victoria grew up in Cameron County and was the first woman to ever run for President of the United States. David Berman and Marcia Smith will honor Frank and Sylvia Berman, VFW Post 6221 will display the pictures of the four servicemen for which the post was named.

The deadline for purchasing a banner is December 31. For more information contact Linda Lundberg from the Sylvan Heritage Council.
Posted by Cameron County at November 14, 2009 No comments:

Robert the Reindeer will highlight Christmas in the Wilds 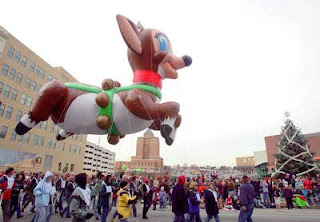 Robert the Reindeer will highlight Christmas in the Wilds

He is 43 feet long and stands 18 feet tall! Robert the Reindeer is helium filled and will make his first appearance in the region at the Christmas in the Wilds parade on Saturday, December 12 in Emporium.

Cameron County Chamber of Commerce Executive Director Tina Johns Lorson says the Macy style balloon will float high above the 24 balloon handlers. “The Emporium branch office of the Mountain Laurel Federal Credit Union is sponsoring the mammoth balloon! The chamber hopes this addition will line the street with people wanting to see a Macy style balloon without the hassles of traveling to New York City.” Anyone wishing to participate as a balloon handler is asked to contact the Mountain Laurel Federal Credit Union or chamber office.

Christmas in the Wilds begins Friday night with the Antique Seekers tour of homes. Saturday morning Santa Claus will have breakfast with children at the Emporium Volunteer Fire Department. Santa has promised to bring Dasher and Dancer with him. They will pose for pictures on Fourth Street in the vacant lot near the chamber office. Inflation of Robert the Reindeer will begin at 11 Saturday morning at the former Fourth Street School. The parade will step off at noon and businesses in Emporium will offer craft projects for children from noon to 3.

Inside the chamber Jakobs Ladder will perform, along with demonstrations from several artists. Outside several vendors will sell items and also have hot drinks and food available while the Emporium Senior Center will host its annual craft sale. Johns Lorson says the events will provide shoppers the opportunity to see what unique gift items can be found in Cameron County.
Posted by Cameron County at November 05, 2009 No comments:

The Center also reports on the number of available jobs in local areas. In September, there were 17,600 non-farm jobs in McKean County. A year before, there were 18,100. There were 15,200 private jobs, down by 400 jobs from September 2008. Goods-producing jobs are also down 400 from last year, with a total of 5,500 now. Service-providing jobs had the slightest hit over the past year, with 100 jobs lost. Those losses are listed in the government sector.

The national economic picture from the Bureau of Labor Statistics is given from December 2007, which they’ve pegged as the start of the recession.The number of long-termed unemployed — those who have been off work longer than 27 weeks — has risen by 4.12 million. The number of discouraged workers — those who are of employment age, but not actively seeking employment — has risen by 430,000.The total of under-employed people — those working part-time jobs instead of full — was 17 percent in September, an increase of 8.3 percentage points. The rate represents 26.2 million American workers.

The Bureau statistics show there were 2.387 million job openings in August of 2009 nationwide; there were 14.928 million unemployed workers. For each available job opening nationwide, there were 6.25 unemployed people in competition to fill that job
Posted by Cameron County at November 04, 2009 No comments: