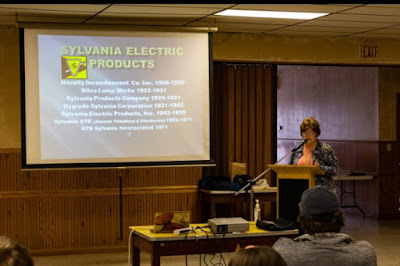 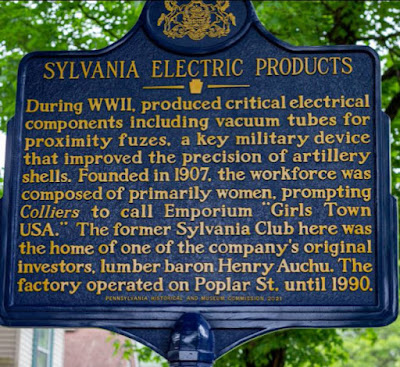 Cameron County Historical Society Presentation
The presentation and unveiling of a Historical Marker honoring the Sylvania Corporation was very interesting and well attended. If you missed it, stop by the plaque at the Northern Tier Community Action Corporation (NTCAC) building and take a look. The Cameron County Chamber has Sylvania booklets for purchase that were put together by the Cameron County Historical Society .
Photos by Brian Reid and Kent Davis.
The Historical Marker will honor the Sylvania Corporation and its many contributions to Emporium, Cameron County, and the United States throughout its decades-long history in the community.
Historical Society Vice President Susan Hoy presented the history of Sylvania and the people who ran the company and patented many of its products and processes. The contributions of the company and community residents to efforts during World War II were also be highlighted.
The presentation covered the history of the Sylvania Corporation, from its beginning as the Novelty Incandescent Company in 1906 in St. Marys, through its former headquarters present-day use by the Caldwell Corporation.
On several occasions, operations were relocated from Emporium to St. Marys. During the most notable of these occurrences, research and development efforts, which were kept secret from majority stakeholders, continued in Emporium and resulted in the invention of a new product, a radio tube, which would completely change the direction of the company, and the community.
The presentation also touched on some of the people who spearheaded the company’s efforts throughout history, including Josiah Howard, Henry Auchu, Robert Kaye, Guy Felt, George Rishell, and Bernard Erskine.
The company would eventually purchase Hygrade Incandescent Lamp Company, becoming the Hygrade Sylvania Corporation, becoming a leader in the radio industry.
Efforts to back the United States government during the second World War are likely the most notable of the company’s achievements. Technologies developed by members of the Emporium community would go on to revolutionize war communications and artillery, and likely helped the allies win the war.
Emporium’s nickname of Girls Town, USA, and the invention of proximity fuses and Lock-In radio tubes will also be discussed during the approximately one-hour long presentation.
From the location of the new Historical Marker, Sylvania’s Emporium factory can be seen. The building was constructed in 1929, and is located behind the NTCAC building, across the Rails-to-Trails.
This year marks the 100th Anniversary of the formation of the Cameron County Historical Society, and a number of events are planned to celebrate. At the Cameron County Chamber of Commerce and Artisan Center in Emporium, a rotating display highlighting different aspects of the community’s history is available for view, along with additional information on upcoming events and contests.
https://www.facebook.com/CamCoHistoricalSociety
https://cameroncohistorical.wixsite.com/cameroncohistorysoc
Posted by Cameron County at May 30, 2021