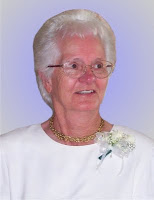 A longtime resident of Emporium, Mrs. Kavulic relocated to Limestone, NY in 1990 to be near her daughter.

In addition to her husband, Mrs. Kavulic was predeceased by six sisters and four brothers.

Visitations with video tribute will be held in the Coppersmith-Condon Funeral Home, Emporium on Saturday, June 18, 2011 from 11 a.m.-12 noon at which time a Memorial Service will follow with the Rev. Gary Atkinson, pastor of the First United Methodist Church, officiating.

Burial was in Newton Cemetery, Emporium.

Memorials, if desired, may be made to Evelyn’s favorite charity, the McKean County Special Olympics, PO Box 101, Bradford, PA 16701.
Posted by Cameron County at June 15, 2011