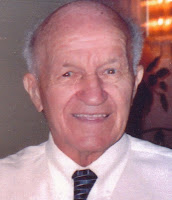 Mr. Schager was a lifelong resident of Emporium. He graduated from Emporium High School in the class of 1937. He retired, after over 42 years, from Sylvania where he was a metal machinist. He enlisted with the US Navy during WW II. He was a member of St. Mark Catholic Church. Carl had many hobbies including golfing, bowling, hunting, fishing and wood crafting. His favorite hobby was making spoon rings and giving them to many people in the area

Mass of Christian Burial will be Celebrated at the St. Mark Catholic Church, 235 East Fourth Street, Emporium on Saturday (December 15, 2012) at 10:30 AM with Rev. Paul S. Siebert, Pastor, as Celebrant.

Visitation with Video Tribute will be at the Barnett Funeral Home on Friday from 5-8 PM. Burial will be in the St. Mark Catholic Cemetery, Emporium.
Memorial Contributions may be made to the Guy & Mary Felt Manor, 110 East 4th Street, Emporium, PA 15834 or to a charity of the donors choice.

Online Condolences may be placed at www.BarnettFuneralHome.net