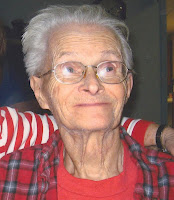 On October 12, 1947 he and his wife, Dolores "Dee" Crosby Burlingame, where married in the 1st wedding to take place in the older Christian & Missionary Alliance Church.
Mr. Burlingame graduated from Emporium High School in the class of 1943. He served with the US Navy during WW II, where he eventually became an electrician. While in the Navy he worked on a yard tug medium moving ships in and out of the San Francisco Bay. He retired from Sylvania at the age of 55 after over 35 years of employment. He then re-entered the workforce at Carbon City Products in St. Marys working 15 years until the age of 70.

He was a member of the American Legion Olkosky-Jessop Post 194, Loyal Order Of Moose Lodge #368, Emporium. He was a member of the Elk County Striders, Barbershop Harmony Society, Elk County Cloggers and the Christian Missionary & Alliance Church where he served as a Sunday School teacher. He was active as a cub scout master, 4H leader, had served as a Shippen Township Tax Collector, was a PA Forest Fire Warden for over 50 years. While working at Sylvania he served as a union steward. Years ago he played in the “Carl and His Hillbilly Pals” Band. He played in the Mens softball & coed volleyball leagues. He enjoyed Hunting, hiking and cross country skiing. He was an avid outdoorsman enjoying many running events including 5k runs. When he was 62 he ran a two mile race for Jefferson County ARC in his work boots. He was a cyclist. At the age of 72 he competed in the (GOBA 300 mile) Great Ohio Bike Adventure. In 2001 when he was 75 he participated in the Cameron County Canoe Classic paddling for the Gray Rats. He was the historian for the Mason-Grugan family.

Visitation will be at the Barnett Funeral Home on Sunday from 2-4 PM. Funeral Service will follow at 4:00 PM with Rev. Joseph Short, Pastor, First United Methodist Church, officiating. A Military Service will be accorded by the Cameron County Memorial Detail will follow the funeral service.
Memorial Contributions may be made to the American Legion Olkosky-Jessop Post 194, 427 East 3rd Street, Emporium, PA 15834 or to the Loyal Order Of Moose Lodge #368, 524 E, Allegany Ave., Emporium