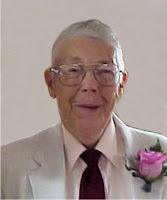 Born April 14, 1923 in Sterling Run, he was the son of DeMonte and Nellie Bunce Whiting. On September 30, 1940 in Selingsgrove, he married Marian A. Coon who died November 30, 2010. This past September Marian and Jim celebrated their 60th Wedding Anniversary.

A longtime resident of Cameron County, Mr. Whiting was a 1941 graduate of Emporium High School. He was a Class A machinist and was employed for many years by Sylvania Electric in Emporium. He also trained many other machinists who refined their skills by serving apprenticeships under his leadership. After retiring from Sylvania he was employed by Gary Brown, also in Emporium. He had done some traveling, loved camping, and had worked in California, Florida and New York State before returning to Emporium.

He was a member of the First United Methodist Church of Emporium, the Bucktail RVers, Cameron County Historical Society, Coudersport Consistory and was a 50 year member of Emporium Masonic Lodge #382 F&AM.

Mr. Whiting is survived by a sister, Beverly (Richard) Cool of Emporium; and three generations of nieces and nephews.

Visitations with Memorial Tribute will be held Friday, May 6 from 2-4 and 7-9 p.m. in the Coppersmith-Condon Funeral Home, Emporium, where Funeral & Committal Services will be held Saturday at 11:00 a.m. with the Rev. Gary Atkinson, pastor of the First United Methodist Church, officiating.

Burial will be in Newton Cemetery, Emporium.
A Masonic Memorial Service will be held Friday at 7:00 p.m. in the Funeral Home.

Memorials, if desired, may be made to a charity of the donor’s choice.
Posted by Cameron County at May 03, 2011