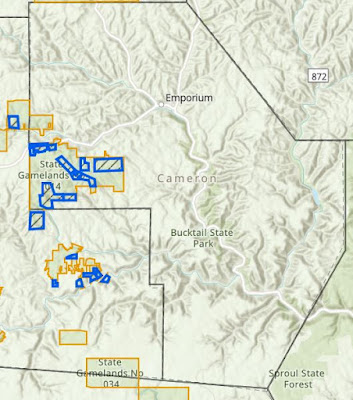 Spray area for Cameron County
The Pennsylvania Game Commission announced plans to spray more than 62,000 acres of state game lands this spring to protect against spongy moths, previously known by the common name gypsy moth.
The spraying is likely to occur this month on 27 different state game lands, including nearly 1,000 acres in State Game Lands (SGL) 321 in Clinton County, as well as other northcentral region game lands in Centre, Lycoming, Potter, Cameron, Elk, McKean and Tioga counties.
Most of the blocks of forest to be sprayed on game lands can be treated within one day, often within only a few hours. The insecticide to be used is Mimic 2LV, the active ingredient of which is tebufenozide. This agent generally is considered safe to humans. As with any chemical, it may cause eye or skin irritation if exposed, and it is recommended to wash any affected area if irritation occurs.
More information on spongy moths and the Game Commission’s spraying program, including a map updating the status of this year’s spraying, is available on the commission’s interactive web page.
More detailed information located here
https://www.pgc.pa.gov/Wildlife/HabitatManagement/Pages/Spongy-Moth.aspx
Posted by Cameron County at May 14, 2022