Tom Hayden, President of Emporium Forging, recently rejoins the Emporium Rotary Club.
Tom had been a past member from 2006-2011. 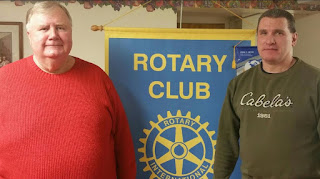 (Pic- Airman) Rotarian, Dave Guloien, introduced his son, USAF Staff Sergeant, Eirick Guloien.. Eirick is a graduate of CCHS afterwards attending Penn State University. After graduating from Penn State, he entered the United States Air Force where he trained at Lackland AFB,Texas. Afterwards he was stationed at Creech AFB, a command and control facility in Clark County, Nevada, used to engage in daily Overseas Contingency Operations. Eirick was then stationed for 6 months in Kandahar, Afghanistan. 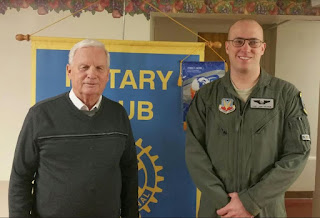 Currently, Eirick is stationed at Nellis AFB Weapons School in Las Vegas Valley, Nevada. The Weapons School graduates 240 students per year, mostly pilots, who are the USAF premier MQ-9 warfighting experts. Eirick is a Sensor Operator for a General Atomics MQ-9 Reaper aircraft, formerly know named Predator B, which is an UAV Drone aerial vehicle capable of remote controlled or autonomous flight operations. Eirick explained some of the systems, capabilities and operations. The cost of this aircraft is $11,000,000 and measures 2.5' tall, 36' long, with a 66' wide wing span and weighs 10,500 lbs. fully loaded with weapons. The sophisticated jet is equipped with infer red cameras, chat systems that interface with other agencies and carry weapon AGM-114 Hellfire missile, an air-to-surface missile, which can hit a target from 546 yards-5 miles with a semi-active laser homing millimeter wave radar seeker.

Tickets are now on sale for the 14th annual Rotary Wine & Cheese Fundraiser February 18th. Must be 21 to attend - Ticket cost $30.00. See Becky Pasquinelli or any Rotarian to purchase tickets. See Ryan Magaro to enter your homemade wine in the contest. 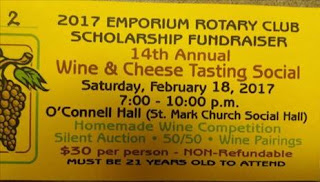